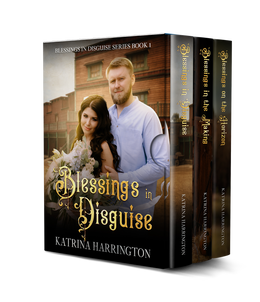 Three Historical Romances with Humour and Mystery for one low Price

Can unexpected troubles prove to be Blessings in Disguise?
Vivian Babbit has had more than her share of struggles in life. After running off and marrying a career criminal at seventeen, she's spent the last ten years raising their two young daughters in a less than ideal environment while watching her husband plan the next big train heist with his gang. When he's killed, Vivian is shocked to find herself hunted by the very men her late husband worked with. Forced to flee with her girls, Vivian takes them to Texas to see her brother, who she hopes will help them, despite her being estranged from the family. Through an odd turn of events, Harvey Richardson finds himself taking in a young homeless girl. And as a friend of Vivian's brother, Adam, he learns of Vivian's situation and offers to marry her to provide a safe place for her and her girls. Trying to come together as a family is challenging to say the least. Can Harvey and Vivian make it work as a couple, despite the disastrous outcome of her last marriage? Will they be able to help Vivian's daughters through their grief, and Harvey's daughter through her issues from being neglected for years? And can Vivian let go of the guilt of her past choices and renew her relationship with the Lord?


Will Blanche find her troubles are really Blessings in the Making?
Clark Mahoney has no idea how to deal with his boss's sixteen-year-old daughter, Blanche, who arrives only days before her father's passing. The girl baffles him with her lack of understanding of, what he considers, basic expectations; and, their attempts at conversing with one another seem to lend way to confusion and frustration on both ends. Added to that, he discovers that rustlers are stealing cattle on the ranch and a secret admirer is leaving disturbing gifts for Blanche. Throw in a new hired hand that's a single father of three and a drunkard, and they are all in for a wild ride. Can Blanche and Clark come together despite all that's going on? Will Blanche be able to figure out this faith in God that everyone around her seems to share? And can they catch the rustlers and this morbid secret admirer?


Amanda is running from her past. Will she miss the Blessings on the Horizon?
Amanda Hall never felt as if she fit into the high society in which her parents participated. Growing up attending functions left a bad taste in her mouth, and the idea of spending the rest of her life participating in the silly practice filled her with a sense of distaste. When her parents arrange a marriage for her to a dangerous man, she finds herself singularly focused on one thing: escape. Answering an ad for a mail-order bride, Amanda embarks on an adventure she'll never forget. Tucker Martin isn't looking for romance. He is content to spend his days working his farm and raising his young sister. Then a woman shows up claiming to be his mail-order bride and turns his whole world upside down. Can this stranger truly be the woman for him? Will their love be able to survive Amanda's past catching up to her? And through it all, can Tucker show Amanda that God is not only real, but loves her and is looking out for her through all the ups and downs ahead? 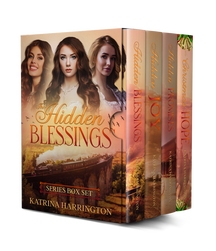 ​Jo, Celia, and Allie Kent respond to mail-order-bride ads and a teaching position in Hidden Blessings.  Serious Jo finds unexpected romance when she shows up to be the first schoolteacher in a western town.  Celia must navigate becoming a wife and instant mother to a widower and his angry daughter.  Allie, who was the family troublemaker, finds herself married to a no-nonsense man, who is none too thrilled with her shenanigans.


In Hidden Joy, Mark Jennings is looking for happiness of his own, after watching his brother and Allie fall in love.  And he finds it in a friend of Allie’s who joins them at their ranch.  But can their relationship survive the rumors that circulate town?  Sadie Martin, Celia’s adopted daughter, is struggling on the cusp of adulthood with following her parents wishes to finish school, while a boy with a dark side seems to have set his sights on her.  Jo’s sister-in-law, Ruth Tucker, has been widowed for ten years, and was certain she would never remarry, that is until she meets the new town doctor…


In Hidden Promises, Josie Jennings, Allie and Levi’s daughter becomes a mail-order bride against her parents wishes.  Her new husband is less than thrilled with her dishonesty.  Can their relationship survive her initial dishonesty and the challenges they will face together?  Savannah Martin, Celia’s daughter, is caught up in the charms of a man visiting their small town.  But is he what he claims, or are her family and friends right that he’s up to no good?  Cassie McConnell, Ruth’s daughter, spends her days working with her father in his medical clinic, where she finds herself quickly falling for the new young doctor who comes to town.  But will he see her the same way?


In The Christmas Hope, follow Daisy Martin’s story as she goes to live with her sister, Savannah, and finds herself enchanted by their neighbor Caleb.  Caleb is raising his younger siblings on his own and takes Daisy up on her offer to help.  A late night, and the potential for destroyed reputations, forces them to marry quickly.  Can their relationship survive their unusual beginning?
Follow these three families on their journeys to find love with laughter and faith.
Powered by